For Unto Us is Given 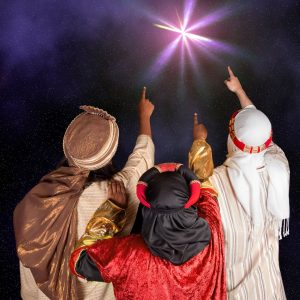 Humans love tradition. Every culture re-enacts or recalls certain meaningful events every year. With Christmas, the celebration of the birth of Jesus has gained trappings galore. As I searched for the photo for this blog, I started with “Christmas,” and all that came up was secular images of lights, wrappings, decorated trees, but not one photo of Jesus at his birth.

“Birth of Jesus” provided me with images related to the miracle we celebrate every year. I chose the image of the Magi, or “Wise Men” because I want to write about prophecy.

God knows we can be blind

and so he made things crystal clear. In our wisdom (?), we turn to logic. We want facts and proofs. Our heavenly Father caters to us with prophecy… as my dear friend often says, “just so ya’ know.”

We start with Micah, an Old Testament prophet writing between 742-687 B.C.

“But you Bethlehem, Ephrathah, though you are small among the clans of Judah, out of you will come for me someone who will be ruler over Israel, whose origins are from old, from ancient times.” (NIV Life Application Bible, Chapter 5, verse 2)

“After Jesus was born in Bethlehem in Judea, during the time of King Herod, Magi from the east came to Jerusalem, and asked, ‘Where is the one who has been born King of the Jews? We saw his star when it rose, and we have come to worship him.’”

That Jesus, of the tribe of Judah, would fulfill Micah’s prophecy that wise men from the east would find this infant and worship him as King, is one of  324 prophecies that prove Jesus is the long awaited Messiah.

I found this link about those prophecies, and the probability of fulfilling even eight of them astounding. This is a great read: https://firmisrael.org/learn/how-many-prophecies-did-jesus-fulfill/

Prophecy can also mean sharing a deeper understanding of Scripture with others. But with prophecy that addresses the future, difficulties may arise. Someone described prophecy as looking at mountain peaks. Some appear closer than others, but they are all mountain peaks. (We find descriptions of the Kingdom Jesus would rule (the “government on his shoulders”) not only in Isaiah, but in Chapter 21 of the Book of Revelations.

Isaiah’s prophecy in Chapter 9:6-7, one of my (and Handel’s) favorites reads:

“For to us a child is born, to us a son is given, and the government will be on his shoulders. And he will be called Wonderful Counselor, Mighty God, Everlasting Father, Prince of Peace.”

And the rest of Isaiah’s prophecy:

“Of the greatness of his government and peace there will be no end. He will reign on David’s throne and over his kingdom, establishing and upholding it with justice and righteousness from that time on and forever.”

“Don’t take my word for it, check it out in your Scripture, like the Bereans,” to paraphrase St. Paul as he preached the Good news to his fellow Jews. (I guess those Bereans were a hard bunch to convince.). Well, they took Paul up on his challenge and came to the same conclusion the entire Old Testament leads us to today. The very Son of God, Prince of Peace, also Mighty God, Everlasting Father, and Wonderful Counselor (Father, Son, and Holy Spirit) dwells among us to this day.