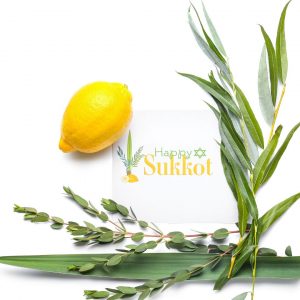 Jesus compared his Gospel to the mustard seed that grows into a tree large enough to support thousands of birds. So when I imagine the universal Christian Church, I see that mustard tree with its many branches, and roots that bore deep into the soil.

In my imagination, the roots represent the Jewish faith. The trunk is the Christian church which divided in 1054, the year of the great Schism. The western church led by Pope Leo IX was based in Rome. Hence, we have the Roman Catholic Church. Patriarch of Constantinople, Michael Cerularius led the eastern branch. From those two main branches sprouted the many western Protestant and eastern Orthodox denominations.

Yet it remains one tree.

Jesus spoke of the vine and branches, Jews and Gentiles, as being one. That is why I value the Jewish High Holidays, especially since I attended the service at Rochester’s Shema Yisrael’s Messianic Congregation for an article I wrote for The Good News Newspaper. https://www.shemayisrael.org/. I fought tears as I joined in worship closest to that of the early Apostles. This is the way Matthew, Mark, and John probably worshipped, I thought. Another gentile attendee said he liked to worship at Shema Yisrael every once in a while because “it deepens my faith.”

Sukkot—one of the Jewish High Holidays

Of all the Jewish High Holidays in this time of year, Sukkot, following Yom Kippur, made a lasting impression on me, mostly because of its meaning and how Jews celebrate it. My source for this blog is God’s Appointed Times by Barney Kasden. [1]

Then the Lord spoke to Moses, saying, “Speak to the children of Israel, saying, ‘The fifteenth day of this seventh month shall be the Feast of the Tabernacles for seven days to the Lord’” (Leviticus 23:33-34 NKJV)

Sukkot, the Feast of the Tabernacles, celebrates the booths (what we would call lean-tos) that provided shelter for the Jewish people as they wandered in the desert. God tabernacled or dwelt with his people in their wilderness journey. Hence the name Sukkot, Zman Simkhatema, meaning “the time of our rejoicing,” because God cared for his people in every way. This time of Fall harvest is a kind of Jewish Thanksgiving. (Some theorize that the Puritans, students of the Old Testament, may have based our first Thanksgiving on Sukkot.) 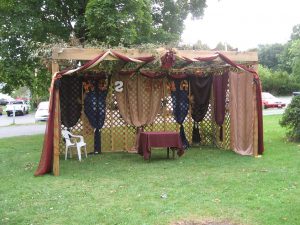 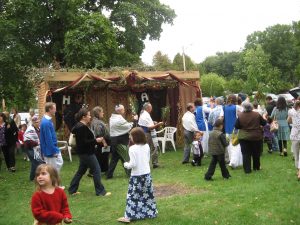 People may construct the roof (sechach) of the sukkah with anything that grows from the ground—branches, bushes, even wood 2x4s. To emphasize the Biblical temporary purpose of the tabernacles, they build the roof so people can look through it and see the stars on a clear night. Artwork by children and adults adds to the joyful nature of the dwelling.

Since Sukkot, like other Jewish holidays, begins at sundown, people share a festival meal, which includes wine and the traditional challah bread. 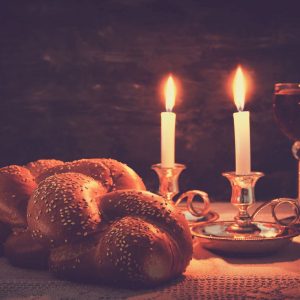 Worshipers bind the Four Elements, made up of palm branches, a fruit (citron), myrtle, and willow branches. Each has significance.

The date palm branches are sweet but have no fragrance. They represent people who have knowledge but no good deeds.

The myrtle (hadas) has a pleasant fragrance but no taste. Myrtle is like people with good deeds but no true knowledge.

Etrog, a fruit from Israel like the lemon, tastes sweet (????) and has a nice aroma, like people who have knowledge and good deeds.

Wrapped together and waved in all directions, these symbolize the harvest and God’s omnipresence.

Our Messianic Jewish brothers and sisters celebrate Sukkot because Christ and his Holy Spirit continue to tabernacle among us until Jesus returns to make all things new. Kasdan sees Sukkot in the  prophetic words of the Book of Revelation.

Then I saw a new heaven and a new earth, for the old heaven and the old earth had passed away, and there was no longer any sea. Also I saw the holy city, New Yerushalayim, coming down out of heaven from God, prepared like a bride beautifully dressed for her husband. I heard a loud voice from the throne say, “See! God’s Sh’khinah is with mankind, and he will live with them. They will be his peoples, and he himself, God-with-them, will be their God.” (Revelation 21:1-3) Jewish New Testament ©1989 by David H. Stern, published by Jewish New Testament Publications. Inc.

I realized if I want to write a blog each week, novels, short stories, and articles, and keep sane, something had to give. By eliminating the monthly Newsletter and incorporating my articles and short stories into my blog pages instead, you will continue to receive these “extras.”

I hope you enjoyed reading this article about the Jewish High Holiday of Sukkot.

Be sure to subscribe on my webpage for new posts, so the link arrives weekly in your mailbox, and you miss nothing.