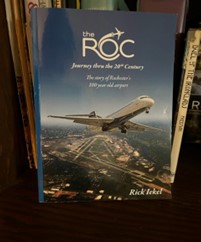 Rick Iekel writes wonderful local history— the kind teachers should use in their classrooms.

In his first book, House with a Heart, Rick cleverly uses the house as the point of view character while travelers seek shelter in it from a storm. In the most engaging way, House (I’m capitalizing the word because by now “House” had become a likeable entity in my mind) tells the story of 19th century life in the small town of Ashford, New York. As we eventually learn, Rick’s family moved into that home when he was two years old.

Moving on to the 20th century, Rick takes the age-old advice to “write what you know,” in his latest historical non-fiction work, The ROC Journey thru the 20th century–The story of Rochester’s 100-year-old airport. For anyone else, this would be a scholarly, objective task. But Rick’s own history blends with the airport’s. His career in aviation spanned 28 years, and culminated when he became Airport Manager in 1989 and Director of Aviation before leaving the airport in 1993.

He opens with the city’s purchase in 1921 of what started as a 110 acre plot of land known as Britton Field. It was already home to those daredevils who loved those new “fangled flying machines.” For Rochester native readers, it comes as no surprise that it took several years to develop Britton Field into the Rochester Municipal Airport in 1930. (We don’t jump quickly into things here on the southern shore of Lake Ontario.)

For aviation and history buffs, his is an in-depth chronicle of how a small municipal airport evolved into the present Frederick Douglass Greater Rochester International Airport. It left me gob smacked when I learned what goes into running an airport that serves several airlines, thousands and thousands of passengers every year, and provides quality vendors to serve them.

Hats off to Rick Iekel, for serving as Airport Manager and Director of Aviation those many years. His hands-on knowledge and on the job experiences make this a historical treasure to read.

When I wrote about The ROC… in Goodreads, I shared that I took great pleasure reading one of his chapters while I was at a gate, waiting for a flight out of our airport. Rick later told me a friend also read his book while traveling back to Rochester. Words about a place burst into life when one reads them on the spot!

The ROC Journey thru the 20th century–The story of Rochester’s 100-year-old airport is available on Amazon, but also these vendors in the Rochester area.